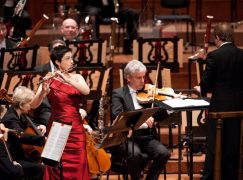 Boston Symphony’s equal pay defence: The flute is not an oboe

The BSO has responded to a claim for pay discrimination by its principal oboe, Elizabeth Rowe, asking the court to dismiss her case. Ms Rowe said she earned $70,000 less than the principal flute, The orchestra says, among other things that

– The flute and the oboe are not comparable instruments, nor are they treated as such by most major orchestras in the United States.

– Each instrument in an orchestra also requires different skills and effort to play at the highest level. Setting compensation for each musician, particularly principals, is a nuanced process involving many factors. Gender, however, is not and has never been one of those factors at the BSO.

The earliest photo of Gustav Mahler? »