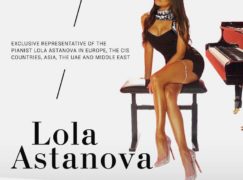 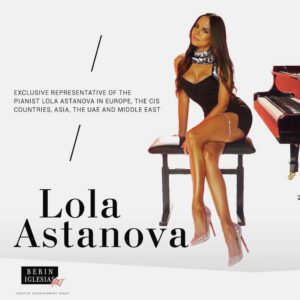 The most viewed and admired classical musician in the world Lola Astanova has signed an exclusive contract with Berin Iglesias Art.

A young and beautiful piano virtuoso Lola Astanova has redefined the classical music scene with her appealing artistic vision, sophisticated fashion style and grace. Lola Astanova has started taking piano lessons at the age of six and later established herself as one of the most triumphant performers. Astanova`s noticeable appearance in the Classical Superstars Fantasy Concert is considered to be her big artistic breakthrough in 2007. Lola`s fascinating career includes a sold-out 2012 Carnegie Hall debut, hosted by the future President of the United States and Dame Julie Andrews. A documentary performance film, featuring Astanova`s interpretation of Gershwin’s “Rhapsody in Blue” with the All Star Orchestra, has won a 2016 Emmy Award.
Lola Astanova is also expanding beyond the traditional classical repertoire as a performer, composer and producer.

The talented pianist has worked and cooperated with many popular musicians and artists including Andrea Bocelli, Alejandro Sanz, Marc Anthony, David Foster, Stjepan Hauser (2CELLOS) and many others. Lola Astanova`s passionate video performances of Chopin, Liszt and Rachmaninoff as well as her own original transcriptions have attracted a younger and broader audience to discover the beauty of classical music.