The death has been announced of Geoff Emerick, Abbey Road recording engineer, a man who had more influence than anyone bar George Martin on the Beatles’s sound.

Emerick, who suffered a heart attack, was 72.

The first Beatles track he recorded was Love Me Do and he continued working with the group til it split up. 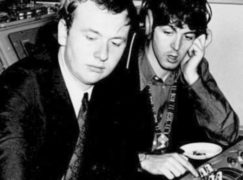