The Moscow Philharmonic Orchestra is offering no explanation for starting a concert 40 minutes late and extending the interval to twice its normal length.

The concert was conducted by Yuri Bashmet.

All the orchestra will say is ‘Unfortunately, unlike in Europe, we don’t start concerts at exactly 1900’.

One audience member said most people around her were under the impression that the conductor had been overly well entertained and did not look fit for purpose.

Natalia Loseva added: ‘I don’t ever remember so much whistling and hooting in the academic hall.’

Bashmet, who has refused to comment, conducts the orchestra again on November 2. Or maybe later. 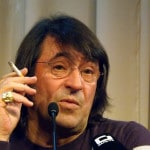