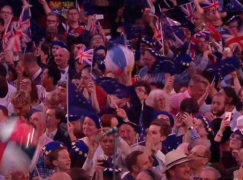 We were the BBC Proms saboteurs

From Aliye Cornish, Administrator at Instruments of Time and Truth, one of many activist musicians who handed out EU flags at the Last Night of the Proms: 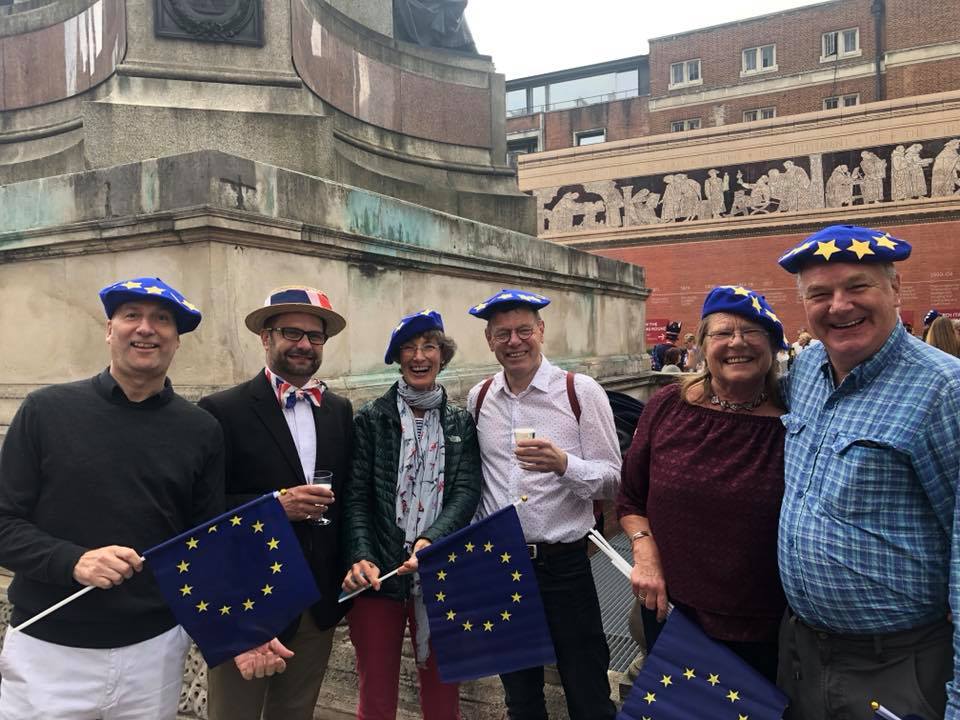 I am writing this post because, as some of you will know by now thanks to social media, I was involved with the EU flag team presence at the Last Night of the Proms. As a freelance musician I have participated in the Proms for the last few years and this year played in Prom 74, Handel’s Theodora with Arcangelo and Jonathan Cohen. In terms of EU flag presence 2018 was the most successful since the movement started in 2016, with 20,000 flags and quite a lot of berets given out across Hyde Park and the Royal Albert Hall for the Last Night of the Proms. We offered them for free, funded by crowdfunding from the public, and in general people were only too happy to take them. Most of the EU flag team wore t-shirts saying “Thank EU for the music” to help with highlighting the concerns of musicians regarding Brexit. I recognize that there are strongly held beliefs on both sides of the Brexit debate and this statement is not going to be an attempt to debate with those who voted to leave the EU. That is not what this post is for. We are where we are, and at this point many musicians have got legitimate, pragmatic concerns about how our work will function in the future.

These concerns do need unpicking, and it has come to my attention that a lot of people simply aren’t aware of the potential impact that Brexit will have on musicians. We have been accused of all sorts of political high jinks with the EU flag distribution, when really the idea at the Last Night of the Proms 2018 was to open an inclusive debate on the matter and raise public awareness. So I would like to elucidate here, and give you the opportunity to disseminate this message further should you wish.

In a poll by the Incorporated Society of Musicians, a third said that 50% or more of their income comes via work in the other EU member states. Remember that some of those polled will be in salaried jobs with UK orchestras. Personally I would say that at least half of my performing income comes from gigs in the EU.

So, following the vote to leave the EU, where does this leave us? The career of a freelance musician has always been a precarious one, but those of us who have chosen that path have put time and energy into building up a portfolio of work across the EU. Until June 2016 this was a perfectly valid career option. I trained with the European Union Baroque Orchestra (now sadly forced to move from Oxfordshire to Antwerp, with UK nationals now missing this valuable opportunity) and that shaped my route into the profession. My first professional employer when I graduated from the Royal Academy of Music in 2009 was the Amsterdam Baroque Orchestra, followed shortly after by a European tour with Sir John Eliot Gardiner’s English Baroque Soloists, with whom I continue to undertake EU touring work. I also work extensively with Paris-based orchestra Le Cercle de l’Harmonie.

As it stands, my colleagues and I have offers of EU work post-Brexit. We have accepted those offers. We hope that the UK achieves a deal with the EU, and we know that in that instance we will retain freedom of movement until the end of 2020, under a transition period. At the moment if I am offered work with an orchestra in Paris, all I have to do is send them an A1 form from HMRC (mine is technically valid until July 2020, but is it?) which demonstrates my status as a UK tax payer, and hop on a Eurostar with my instrument.

If freedom of movement is lost, as it is likely to be following a transition period, then suddenly things are more complicated. I have it on good authority from colleagues who remember the days of pre-EU touring that the whole thing was rather more cumbersome than it is now. Let’s be clear about this, musicians are not simply opposing Brexit because we are lazy and don’t like bureaucracy. The practical application is that with loss of freedom of movement we are suddenly potentially required to provide instrument carnets, work permits, visas, customs declarations… these things take time, energy and money! As it stands, if you tour to the USA with an instrument (as I did 11 months ago) you have to carry a document certifying the materials contained in your instrument. If the customs officials suspect that your instrument contains a banned material then it will be “ceased”. Their word not mine. Now, I accept that it is unlikely that this sort of regulation will be applied overnight on March 29th 2019. But you can understand that no-one wants to risk their expensive instrument being “ceased”. Without a common rulebook, at this point, anything is possible.

It has been 18 months since the UK government ‘triggered’ (why do we have to use this verb?) Article 50. Since then we have heard nothing about freedom of movement regarding services. Nothing. That is simply extraordinary.

I am involved in organizing a tour with the Oxford-based orchestra Instruments of Time and Truth. We go to Spain for a week and leave the UK on March 29th 2019, which is the day that the UK is set to leave the EU. With just over 6 months to go I have no idea if I am supposed to be organizing work permits, instrument carnets, customs declarations for anything going over by road…We have to get paperwork in place for 40-50 musicians. Do we only need paperwork for our return journey? Do we need to demonstrate on our return journey that we left the UK on March 29th, even though that technically wasn’t an issue at the time? Does every member of our choir and orchestra need to apply for a work permit? These take time. I’d like to start on it now if it needs to happen. We have accepted the dates so I accept that this paperwork may well need to materialize. I would just love to know what it is that I have to produce. This is a shocking dereliction of duty by our government.

Going forward, if we do need to generate this paperwork for tours in the EU then realistically the admin costs will need to be added on to our fee. Will a promoter in the EU want to book a UK group, or would they prefer a group from an EU member state operating without the burden of bureaucracy? Ultimately what happens? I imagine that no-one is told, outwardly, “this is because of Brexit”. But the emails stop coming. The phone calls stop coming. This will also be true for freelancers, and I am afraid that it will hit us hard.

If, as has been floated in the media this week, EU nationals are not eligible for special treatment after Brexit, what happens to our orchestras? Do EU nationals playing in the Last Night of the Proms earn the £80,000 a year required to keep their place here?

If Brexit means that EU nationals will be charged higher fees to study at our conservatoires, then how many can afford to come? The net widens outside of the EU. Does the level of talent diminish? Perhaps the professors that they wanted to study with couldn’t stay anyway.

There will be a lot of noise in the press over the coming days about the EU Flags at the Proms. I hope that the message that we are trying to convey will not get lost in that noise. In order to maintain our place on the world stage we need to preserve freedom of movement in the EU.

Musicians or not, we will welcome your support. To keep the UK as a thriving centre for classical music it is absolutely essential that we retain freedom of movement post-Brexit. Music is borderless. If you enjoy what we do then please help us at a time when our livelihood is under threat.

To support us:
1) The biggest step is to share this post. We’re delighted that you want to share this, so thank you from me and those with whom I stand.

2) If you live in the UK and are really super serious about wanting to support classical music in the UK then write to your MP to ask what is being done to support freedom of movement for creative industries post-Brexit. The BBC Proms is an amazing platform for classical music across the world. We don’t want to lose our place on this stage.

In remembrance of James Mallinson »