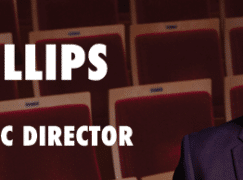 The Philharmonic Society of Orange County announced today the appointment of Tommy Phillips as its new President and Artistic Director, effective October 1, 2018. Phillips succeeds John Mangum, who stepped down from this role in April to become the Executive Director and Chief Executive Officer of the Houston Symphony.

In a career spanning more than 15 years, Phillips is known for his innovative programming ideas, reliability and trust within the classical music industry, and for his capacity for creative ingenuity. Holding artistic positions and programming consultancies at orchestras across the country, Phillips has guided music directors, and helped build strong foundations and connections for institutions including the San Diego Symphony, San Francisco Symphony, Minnesota Orchestra, Grand Rapids Symphony, San Antonio Symphony, Charlotte Symphony, Pacific Symphony, and Mainly Mozart Festival, among others.

« Can music be transgender?