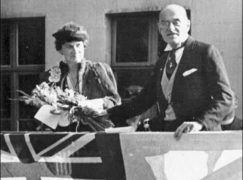 The UK musicologist who plotted a Nazi takeover

Tim Tate, author of Hitler’s British Traitors, has a fabulous story of a Hitler-friendly musicologist who was being tracked by the secret services.

Evidence that Dr. Leigh Vaughan-Henry, a celebrated musicologist, conductor and ardent anti-Semite, had created a substantial organisation to lead this revolution is held in an otherwise obscure Treasury Solicitors’ file, open for inspection at the National Archives in Kew. It contains extracts of reports from undercover MI5 agents who penetrated Vaughan-Henry’s innermost circles; these show that the self-proclaimed “Leader” was getting ready to replace the elected government with a pro-Hitler puppet régime just as soon as German troops landed in Britain.

To ensure the coup’s success, he was planning the “intimidation of certain people by threat and possible action against their wives and children; bumping off certain people (this to be organized with great care.”

« More women’s works than ever in US symphonic season