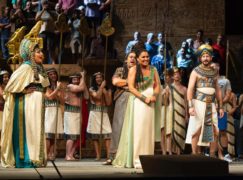 So how was Netrebko’s Aida at the Met?

The NY Times and WSJ reviews are not out yet.

But here’s George Loomis in the Financial Times:

Anna Netrebko had not sung Aida since her role debut at the 2017 Salzburg Festival, but judging from her exciting performance here, she could hardly wait to return to the role. It’s as if pent-up urgency found release in a portrayal that is sumptuously intoned, viscerally charged and consummate in musicality. Netrebko’s voice has attained a heft and an ever-so-slightly darker hue that make her unrivalled in Verdi’s classic dramatic roles. She meets squarely every challenge of Aida, not least that of producing a glorious high C in the aria “O patria mia”. And if her portrayal of the Ethiopian princess has gained a new dimension, it is the fevered intensity she brings to confrontational scenes (more here).

And try this from Eric C. Simpson in New York Classical Review:

…  the Russian soprano has rarely sounded better than in the title role of Aida on Wednesday night. There was no trace of the slight wobble that has occasionally crept into her singing. In this performance she showed an unusual focus along with the tremendous vocal power and passionate conviction that are her hallmarks as a performer.

“Ritorna vincitor” was an arresting moment early on, as she threw herself into the scene with abandon. Both here and in “O patria mia,” she showed her gift for playing in the grand style, making a convincing portrait out of the sort of wide gestures that from other singers can come across as over-the-top mugging (more here).

UPDATE: A crtical self-parody in the NY Times:

At this stage of her career, Ms. Netrebko’s voice abounds in richness, depth and dusky colorings. Yet there are still elements of the bloom and sweetness from her days as a lyric. In climactic outbursts, when she summoned all her smoldering power, Ms. Netrebko sent phrases slicing through the brassy orchestra and into the house. Yet in plaintive passages, the melting warmth of her tone and the supple way she shaped long lines held you in thrall.