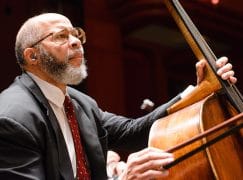 The NJSO has announced the death of Paul Harris, its principal double bass for 28 years and a regular stand-in with the NewYork Philharmonic.

Its obituary is written by Paul himself.

…The Plays and Sonnets of William Shakespeare, the Music Dramas of Richard Wagner and the works of numerous philosophers from Plato to Descartes and from Kant to Foucault were also passions for Paul. He was a devoted autodidact as much as he could be, leaving no stones unturned in the quest for enlightenment, and a cover to cover ‘philological’ reader.

Nearly 30 years ago he chose to live an ascetic life, giving up television and light entertainment for a voracious consumption of those timeless works. He designed, furnished and decorated a castle in his mind; a happy place of refuge from the paradoxes of normal human experience.