I’m recovering in the refreshment area of Jerusalem Music Centre after three concerts of music by Israeli composers, written over 70 years. 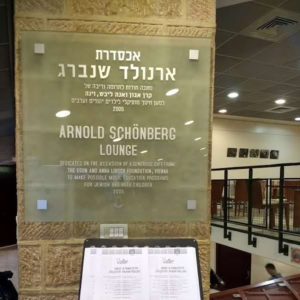 Much of it was incredibly intense – two clarinet quintets by Gideon Lewinsohn and Yoav Talmi – better known as an international conductor – leave no place to hide. Lewinsohn demands a higher than average level of player participation, ordering them to decide aleatorically on the order of movements. Talmi has each of the string players produce a different tapping noise from his or her instrument.

But the knockout piece was a 35-year old work by Mark Kopytman for Yemenite soloist and orchestra in which the dedicatee, Gila Beshari, confronts a Mahler-sized orchestra without fear or favour, delivering her songs with the force of a Shakespearian tempest.

This is among the most performed works by a modern Israeli composer. I’ll try to find a clip.