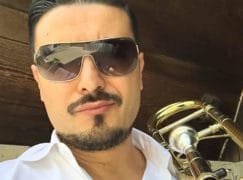 As the investigation into WilliamPreucil continues, another case comes to light.

Message from the orchestra:

CLEVELAND, September 15, 2018, 1:30PM – The Cleveland Orchestra announced today that it has suspended principal trombone Massimo La Rosa as part of an ongoing independent investigation into allegations of sexual misconduct.

Following a report that surfaced in July detailing allegations against concertmaster William Preucil the Orchestra suspended Mr. Preucil, and the Board of Trustees established a special committee to oversee the Orchestra’s investigation and response. In August, the special committee announced that it had retained the New York law firm of Debevoise and Plimpton LLP to conduct a full independent investigation of sexual misconduct and related issues within the Orchestra. That investigation is ongoing, and Debevoise is working diligently to complete the process while also being as thorough as possible. Mr. Preucil remains on suspension.

David J. Hooker said, “We are committed to conducting a thorough and extensive review to make sure The Cleveland Orchestra is able to provide a safe, professional work environment. There is nothing more important for our musicians and our staff than an environment where they can perform their duties without harassment or abuse. We are proud to be regarded as one of the world’s great orchestras, and we want our all of our musicians and staff to be just as proud of how we treat one another and conduct ourselves as an organization. ”

« The UK musicologist who plotted a Nazi takeover