The Welsh tenor Kenneth Bowen, bearer of the above accolade, died yesterday in Cheltenham at the age of 86. 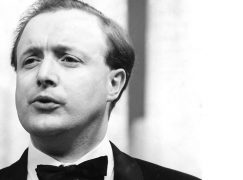 A busy oratorio singer in the 1960s and 1970, ranging from Handel to Schoenberg to Tippett, he became Professor of Singing at the Royal Academy of Music in London, where his students included the broadcaster Aled Jones and the bass-baritone Neal Davies. He recorded extensively. His son Geraint is co-artistic director of the Three Choirs Festival. His son Meurig is former director at Cheltenham. Our condolences to the family.