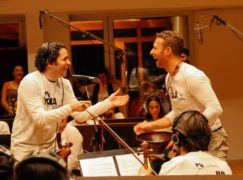 The headliner on a season opener would once have been Rachmaninov or Stravinsky, at worst Rubinstein.

These days the LA Phil has to sell itself with rock stars. Weep.

Los Angeles, CA (September 27, 2018) The Los Angeles Philharmonic and Music & Artistic Director Gustavo Dudamel ushered in the orchestra’s Centennial season with a celebratory Opening Night Concert & Gala, California Soul, Thursday, September 27, 7 pm, at Walt Disney Concert Hall. The festive evening featured singers Chris Martin of Coldplay, who brought Dudamel and the LA Phil’s YOLA musicians to the 2016 Super Bowl, and Corinne Bailey Rae, who performed at the Hollywood Bowl earlier this year. Also performing were The Doors’ drummer John Densmore, electric violinist Tracy Silverman, speakers Shalita Grant and Bernard White, and the Los Angeles Master Chorale, in a program dedicated to honoring Golden State creativity from John Adams to Frank Zappa. Elkhanah Pulitzer, who has had several major projects with the LA Phil, directed the program, spanning a spectrum of music that reflects the unique soul of California and has nurtured and inspired the LA Phil for a century.

The night also included the unveiling of WDCH Dreams by Refik Anadol, a visual art installation projected onto the exterior of the Concert Hall, as well as a post-concert party with Pink Martini and KCRW DJ Jason Bentley.

The LA Phil Opening Night Gala and Concert, California Soul, raised more than $3.4 million for the LA Phil’s many music education programs, which serve more than 150,000 youths, families, and teachers every year.

The pre-concert cocktail reception was held on Grand Avenue, where guests enjoyed hors d’oeuvres and a specialty vodka cocktail “California Dreamin’ Lemonade” mixed with Magic Color Changing Blue Ice, in a cool, California setting of modern white and chrome sofas, lounge chairs, with a hint of blue and silver linens.

« Opera house of the year is… them, again

No response from UK orchestras to collusion charges »