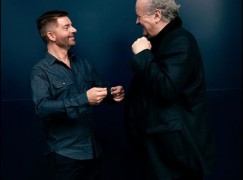 This release has just landed from Lucerne. Behind the terse words, you can hear the Swiss seething:

Lucerne, 5 September 2018. Matthias Pintscher, Principal Conductor of the Orchestra of the Lucerne Festival Academy, is unable to fulfil his further commitments for personal reasons, the Festival’s management has announced.

The Management of Lucerne Festival is currently clarifying who will take over Matthias Pintscher’s conducting duties for the Orchestra of the Lucerne Festival Academy for the rest of the current year.

The phrase ‘personal reasons’ usually means a massive bust-up. Our sources at Lucerne have no details, yet.

Pintscher succeeded Pierre Boulez as head of the Academy orchestra, together with Wolfgang Rihm.

Not so happy now.

UPDATE: The flare-up must have been sudden since Pintscher performed Kurtág, Eötvös, Bella and B.A. Zimmermann with the Academy on Saturday night.