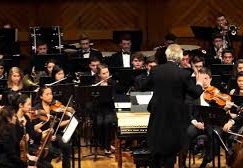 Statement from the US Department of Justice:

According to charging documents, law enforcement in Boston received information regarding an online storage account suspected of containing child pornography. The IP address linked to the account was assigned to St. George’s internet account. Further investigation into the files revealed approximately 83 images and videos depicting the sexual abuse of children, including a one-year-old girl.

A search warrant executed at St. George’s residence today revealed thousands of files of child pornography, including the sexual assaults of children between six-and-eight years old. It is alleged that St. George has been receiving and downloading child pornography from the “Dark Web” and taking steps to conceal his identity.

The Boston Philharmonic Orchestra was founded in 1979 by the British-born conductor Benjamin Zander. a youth orchestras was added some years later.

The orchestra has not responded to the charges against its artistic advisor. Zander has described St George as ‘my lifelong musical collaborator’.

« UK orchestras said he was Trouble