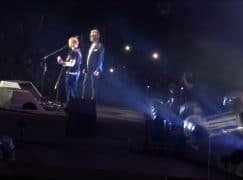 Bocelli fans demand money back after he sings opera aria

From the Daily Mail, an irrefutable source for culture and the vox populi:

British tourists who paid £1,400 to watch ‘world’s most beautiful singer’ Andrea Bocelli performing his hits in Italy complain after getting a ‘boring’ opera about an obscure poet instead…

Rather than the tenor’s greatest hits, the performance was an opera about an executed French poet that few of the audience had heard of.

Anita Lowe, 62, who went on the 11-night excursion with husband, Christopher, 63, said she broke down in tears because she was so disappointed with the event. She complained to tour operator, Leger Holidays, but is furious they have offered just £350 compensation.

The opera, btw, was Andrea Chenier.