I have just come out of a live performance of The Trump Sonata, a 13-minute piece by Avner Hananin for solo piano and edited video.

Hanani has taken clips of Trump speeches and composed a piano accompaniment that draws on the President’s speech melodies, augmenting his melodic patterns so effectively that we realise how and why he is such an irresistible and dangerous demagogue.

The sonata neither alters nor distorts Trump. There are his phrases, his gestures, his song-song. He is at once comic, seductive and subversive. The music does absolutely no more than is necessary. It is a masterwork of restraint, a lesson from history.

She has announced a chamber concert with members of the Philharmonic in Tel Aviv next month.
Programme:
Prokofiev: Overture on Hebrew Themes
Mendelssohn: Piano Trio no. 1 in D minor, op. 49
Schumann: Piano Quintet in E-flat Major, op. 44 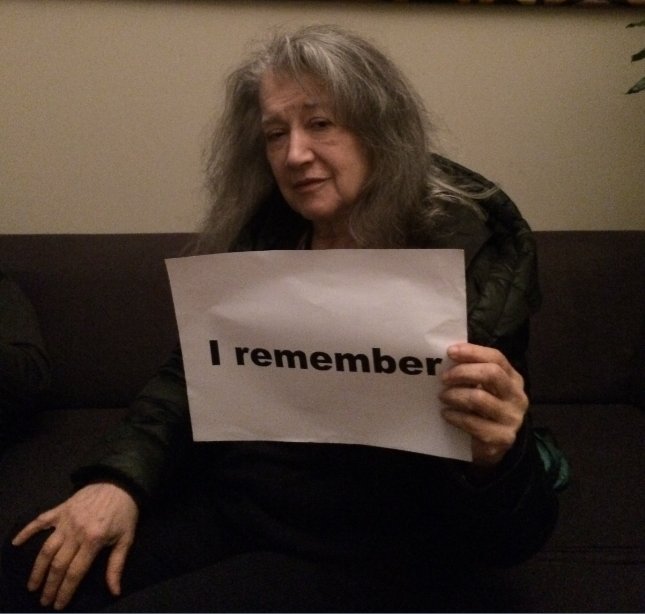 Second was Risa Hokamura, 17, from Japan. 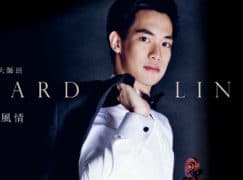 We musos may be critical of conductors (cf. Norman Lebrecht, The maestro myth: great conductors in pursuit of power), but don’t get me wrong, we deeply admire great ones—such as Boulez, Tennstedt, Gardiner, Rattle (unlikely bedfellows…).

Apart from Boulez, another highlight of depping regularly with the BBC Symphony Orchestra was working for Rozhdestvensky (known in the trade as Noddy)….

Some called him Father Christmas, taken from the meaning of his Russian name.

And maybe his habit of giving musicians a half-day off when he was bored in rehearsal.

The winner (pictured) is a member of the Munich Chamber Opera. 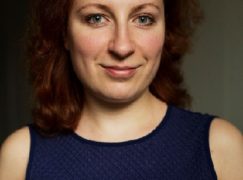 Just in time for the last section of our Fortnightly Book Club focus on Curtis.

In this segment, we have a final video Interview of our guest host, Roberto Díaz, President and CEO of Curtis. Topics covered are the founding of the Settlement Music School in 1910, an institution which offers free music education to the underserved in Philadelphia, and the expansion of that design in 1924 to an older, but still free institution named after the founder, Mary Louise Curtis. The recent donation of 55 million dollars by Nina Baroness von Maltzahn, which is the largest single gift to an American Music School – how did this come about, and what has it done for the school? Powerhouse‘s Investigation into the „performance gap“ at Curtis, and finally, the musician as global ambassador.

We are reading from Powerhouse (MacNeice/Bowen) to learn about the unique business structure. Memoirs of Gary Graffman – I Really Should be Practing – and Rudolf Serkin – A Life, both former Presidents of Curtis, give us historical perspective.

We heard from the Serkin family last post, and for some Graffman words, I direct you to this lovely, candid interview. http://slippedisc.com/2018/09/gary-graffman-nearing-90-never-misses-a-lesson/

Stay well, and see you in a Fortnight, when we will be hearing from guest host composer Bruce Adolphe (you may know him from Performance Today’s Piano Puzzler and Lincoln Center) what we will be reading next. As always, emails can be sent to: fortnightlymusicbookclub@gmail.com

The mindless Sony Corporation has been forced to rescind its block on a Bach video by the pianist James Rhodes in which it claimed to own 47 seconds of the music.

Rhodes, who is active on social media, raised a twitter storm and the corp eventually retracted.

You can see the restored video here, still with the Sony notice. 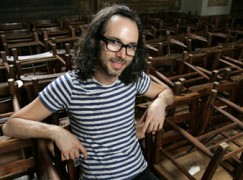 The union deal reached last month includes a sweeping away of a particularly irksome restraint. From 2019, the Met will give performances on Sundays.

New York – Friday, September 14, 2018 – — The two major musical unions at the Metropolitan Opera, the Associated Musicians of Greater New York, Local 802, AFM and the American Guild of Musical Artists (AGMA) announce the approval of a new contract with the institution, pending final ratification on Monday by the AGMA Board of Governors.

The unions represent several categories of workers at the Met, including the Regular and Associate Musicians of the MET Orchestra and Music Staff and Assistant Conductors, represented by Local 802, and the AGMA-represented Chorus, Soloists, Stage Managers, Stage Directors, Staff Performers, Dancers, and Choreographers. The joint statement is as follows:

“We, the musicians and musical artists of the Metropolitan Opera, believe in the future of opera and are deeply committed to collaborative efforts to guarantee the stability and artistic vibrancy of the Met. Throughout this process, we have worked to achieve a favorable economic agreement, including compensation and benefits improvements, that support artistic excellence and help to ensure that musicians are able to live, work, and raise a family in this great city. Demonstrating a continued willingness to invest in the Met’s long-term stability, we have agreed to add Sunday performances, which we recognize will reach new audiences, while also securing important protections and improvements that will safeguard artists’ worklife balance. Additionally, going forward, musicians will have a stronger voice at the Met as members of the continuing Efficiency Task Force, a newly-created Artistic Advisory Committee, and a new Public Engagement committee tasked with exploring innovative ways to creatively interact with fans, increase revenue, and modernize the institution. We are heartened by the fact the Met is prioritizing the artists who bring grand opera to life for audiences around the world, and look forward to an artistically vibrant season.”

“The Metropolitan Opera’s product is the talent of its skilled musicians and musical artists, who consistently deliver excellence with every performance, both on stage and in the pit,” said Tino Gagliardi, President, Local 802 AFM, “This summer, the committees negotiated a favorable economic package that will allow the Met to maintain its high standard of musical excellence, balancing compromises made to ensure the institution’s long term viability with protections for hard-working musicians. The musicians of the MET Orchestra can now turn their attention to bringing the joy of grand opera to New Yorkers and visitors from around the world.”

“We are delighted to have reached agreement with the Metropolitan Opera through a collaborative and mutually beneficial process. Our respective negotiating committees worked tirelessly throughout the summer to ensure that all Artists in every category were heard and achieved improvements in benefits and working conditions,” stated Leonard Egert, National Executive Director of AGMA. “Recognizing that a safe and supportive environment is imperative to rehearsing and performing at the highest level, we created an innovative process for the unions’ direct involvement and input into preventing sexual harassment and discrimination which have no place at the Met.”

“Every member of the MET Orchestra has devoted their lives to their craft, their artistry and their musicianship. This agreement exemplifies that commitment by ensuring that the Metropolitan Opera we all know and love is well positioned to thrive artistically for years to come,” said Jessica Phillips, clarinetist and chair of the MET Orchestra Committee, “Throughout negotiations, preserving the high artistic standards that have made the Metropolitan Opera among the most important opera companies in the world was the foremost priority. This agreement further empowers musicians and artists by expanding our ability to partner with the Met and be of help in areas related to financial efficiency, artistic evolution, and audience outreach. We believe that the future of the Met Opera is bright and and we’re looking forward to the exciting new season ahead, particularly as we welcome our new Music Director, Yannick Nézet-Séguin.”

“This summer, recognizing that Sunday performances are integral to reaching new audiences, we agreed to a major adjustment to our professional and family life, introducing Sunday matinees to the Met Opera schedule beginning in the 2019-20 season,” said Ned Hanlon, chorister and chair of the Met AGMA Committee, “We have been able to balance this with base pay increases and improved benefits, as well as protections to ensure that we, the artists of the Met, will still have time to spend with our families, restore our minds and bodies, and prepare to be at our best throughout the rigorous season.”

I shall be in Zikhron Yaakov this afternoon for a performance of Away From Me by Boaz Ben-Moshe.

It is described as ‘a transgender cycle for soprano, flute, bassoon, guitar piano and electronics’.

The composer, who will play electric guitar, is a professor at the Rubin Academy in Jerusalem. The recital is part of the 21st festival of Israeli music.

I have no idea what to expect. 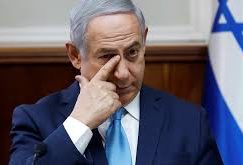 The German violinist has announced the first unwalled concert in her 40-year career.

Next September in Munich’s Königsplatz she will play Under the Stars, a selection of John Williams’ film music for a commercial producer, Deag. 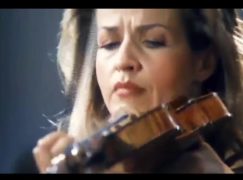 Camille Saint-Saëns was the first Frenchman to compose piano concertos. Of the five that he wrote between 1858 and 1886, only the second gets much play and one hears few claims that the rest are scandalously neglected. Some connoisseurs consider the fourth his best. Most agree that the fifth, a pastiche of tunes supposedly sung by Egyptian boatmen at Luxor, falls somewhere between embarrassing and irredeemable.

The Canadian pianist Louis Lortie and the young Frenchman Bertrand Chamayou have kicked off cycles of the concertos on their respective labels…. 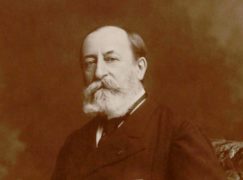 In addition to a £25,000 cash prize, Lu receives worldwide management with Askonas Holt, an album on Warner Classics and performances on BBC Radio 3. On Thursday Lu will open the Royal Liverpool Philharmonic Orchestra season with Vasily Petrenko in Beethoven’s 4th piano concerto.

The competition was refreshingly clean of manipulation thanks to the absence of teachers on the jury.

The prizes were presented by Lang Lang. 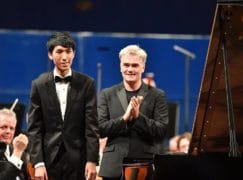 The winner (sic)* said afterwards: ‘It’s still surreal, and I am a bit speechless. I am deeply honored to have received the First Prize and Gold Medal at the Leeds International Piano Competition tonight. I want to thank my teachers Jonathan Biss, Robert McDonald, and Dang Thai Son. Also to my previous teachers Dorothy Shi, A. Ramon Rivera, and Alexander Korsantia, all of whom have taught me so much.’