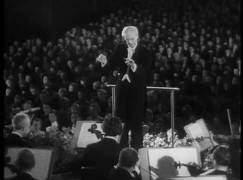 What Furtwängler brought to the party

Following a flood of engaged responses on Slipped Disc, Joseph Horowitz has expanded his original perceptions on the Berlin Philharmonic conductors and the Nazis.

Thanks so much for this engrossing feedback. Maybe we could summarize that the truth about Furtwangler falls within these two polarities:

1.He stressed the communal experience of music, felt he couldnt access that outside Germanic lands (I find this credible), so he accommodated the Third Reich insofar as he had to, so long as he didnt have to join the Party and otherwise publicly endorse Nazi ideology, ethnic cleansing, book-burning. At the same time, his conservative cultural/political mindset created some degree of common ground with the Nazis. Think of Mann’s superiority posture in Reflections of a Non-Political Man (worth reading if you don’t know it). I cannot envision WF feeling personally kindred to a Hitler or Gobbels; his breeding was aristocratic.

2.All of the above – but add to that some degree of actual enthusiasm for what the Third Reich stood for – eg concerts that were patriotic occasions, flaunting German exceptionalism/Kunst. Especially given the passions/exigencies of wartime. In other words: crossing the line Mann refused to cross, and doing so with some degree of fervor….

Meanwhile, thanks to Norman Lebrecht, a second thread of responses on slippedisc.com tackled another aspect of the Furtwangler phenomenon: his rejection of non-tonal music and its implications for musical interpretation.