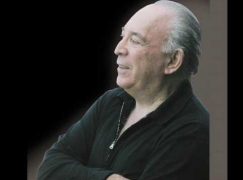 This maestro made time for a boy with cerebral palsy

From the neuropsychologist Esther Klag:

I was a graduate student in Israel, idealistic and naive, working with a boy who had cerebral palsy and some motor difficulties. He was passionate – and serious – about classical music, dreamed of playing an instrument or being involved in music in some way, but in those days this was considered pure fantasy. He was left out of music classes at school. His loving family were puzzled why anyone would want to play or even listen to music if he couldn’t dance the hora to it.

I tried to research options for him – phoned, wrote, enquired. Then I thought of Noam Sheriff. I had been at a concert of his, impressed and moved by him. I looked him up in the phone book and called, just to ask for a possible contact.

Not only did Noam speak with me at length, he invited this boy to his home so that he could get an idea of how he could help! The boy left my room a changed lad and I remain blown away by the sheer kindness and unstinting respect of the famous man for an unknown child and for music.

A second burial for Dmitri Hvorostovsky »