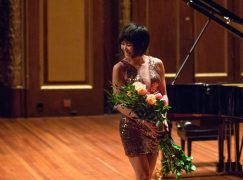 The Berlin Phil are back with a Wang

Summer’s over, the Berliners are back tonight.

The Berliner Philharmoniker will open the 2018/2019 season under the baton of chief conductor designate Kirill Petrenko today, Friday, 24 August. One year before he officially takes up his post with the orchestra they will present key works of the orchestra’s repertoire: Symphony No. 7 in A major, op. 92 by Ludwig van Beethoven and the tone poems Don Juan op. 20 and Tod und Verklärung op. 24 by Richard Strauss.

The Berliner Philharmoniker will undertake their first tour with Kirill Petrenko from 26 August to 3 September, with concerts at the Salzburg Festival (26th/27th August), the Lucerne Festival (29th/30th August) and the BBC Proms in London (1st/2nd September). The programmes will include Ludwig van Beethoven’s Symphony No. 7 in A major, op. 92, Richard Strauss’ tone poems Don Juan op. 20 and Tod und Verklärung op. 24, La Péri by Paul Dukas, Sergei Prokofiev’s Concerto for Piano and Orchestra No. 3 in C major, op. 26, with Yuja Wang as soloist, and Franz Schmidt’s Symphony No. 4 in C major.