Rain pours in on a Salzburg Festival recital

At last night’s recital by Grigory Sokolov in the Grosses Festspielhaus at the Salzburg Festival, as Sokolov was into the trio of the final menuet of Haydn’s 49th sonata, nearing the end of an all-Haydn first half, water began to pour from the ceiling onto the patrons in the 5-8th rows, center.

I was sitting in the 1st row, directly in front of Sokolov, and was reluctant to turn around, not wishing to distract him…but of course the water was coming down loudly, as if from a large showerhead, pouring from one of the light fixtures high overhead, and it’s hard to believe he didn’t hear it. Nonetheless, I never saw so much as a glance or any other sign he was aware of the deluge – his commitment to the music was absolute – and his performance appeared in no way affected by the fact that roughly two dozen people had to get up right in front of him and quietly file out.

After a slightly longer than customary intermission, during which the leak was stopped, the floor mopped, and dry seat cushions provided for the affected patrons – several of whom did not return – the program resumed with a stunning Schubert D.935, plus the usual generous complement of wondrous encores, six in all. The fourth of these was – naturally – Chopin’s ‘Raindrop’ prélude. 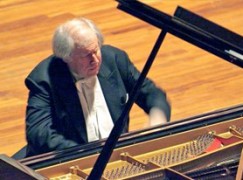