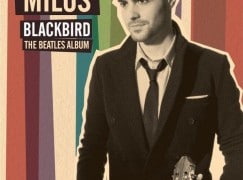 The Montenegro guitarist made his comeback last night at the BBC Proms after almost two years’ absence with a hand injury. He played the world premiere of Joby Talbot’s guitar concerto ‘Ink Dark Moon’.

Hours earlier, Milos announced a switch from Deutsche Grammophon to London-based Decca. Both labels are owned by Universal but there’s a degree of rivalry between them. He still has one more release to come out on the DG contract. It might, perhaps, get less whizz-bang promotion than usual.

And the composer Max Richter is curating sleepy-time on Apple Music. Press release:

Universal Music Group has launched the new ever-evolving Peaceful Music Playlist on Apple Music. Peaceful Music is a living, breathing collection of contemporary and calming music, specially curated by today’s leading composers and superstar artists of the genre. Pioneering composer Max Richter is the first artist ambassador to preside over Peaceful Music, making expert selections to provide listeners moments of calm and inner focus. With more legendary and exciting names due to join the movement, Peaceful Music is for everyone and available now exclusively via Apple Music.

So why don’t more women (and men) come forward? »