Exclusive: Guy is forced to fly his cello first class

The British cellist Guy Johnson, flying from London to his Eastman teaching position at Rochester, NY, was obliged by American Airlines to pay a first-class ticket for his cello.

Guy had booked British Airways, but the US leg – Chicago-Rochester – was taken over by AA.

Here’s what his folk say happened.

‘Before booking the AA flight, I called them to check that it would be possible to book a cello on these particular flights. I was advised that a cello seat could only be booked on these particular flights in First Class, due to dimensions/design of the seats/planes.  This does not apply to all AA flights, but just to the specific planes involved in these routes on this occasion.

‘Both Guy and the cello each cost more for the Chicago-Rochester return ticket than Guy cost for the London-Chicago return ticket.’ 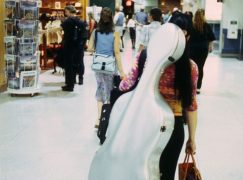 Beware of flying AA and BA. They are out to screw you.