Joseph Cullen, 58, former director of the London Symphony Chorus and the Huddersfield Chorus Society, has been jailed for a second time for child sex offences.

He was found guilty of abusing a nine-year-old boy while he was choirmaster at St Andrews Cathedral in Glasgow in the 1980s.

Cullen was jailed for 10 months. In 2015 he was sent down for 12 months in Glasgow for using lewd and libidinous conduct against two other boys. 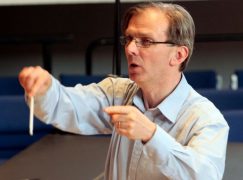