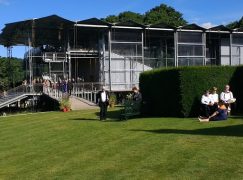 Death of a countryhouse orchestra is a cause for concern

We’ve received dozens of messages, many of them private, expressing serious disquiet at Garsington Opera’s summary decision to replace its freelance orchestra with two brand-name bands, the Philharmonia and the English Concert.

Garsington’s orchestra, comprised of outstanding London players, has been praised to the skies for its fabulously engaged performances in the heart of an English meadow under the direction of Douglas Boyd.

But Boyd has been gifted a deal by the Philharmonia, which has little work in summer. His letter to the Garsington players falls some way short of sympathetic:

Your loyalty and the excellence of your playing have contributed hugely to the artistic development of Garsington Opera and have been deeply appreciated by everybody. I realise that this will be enormously disappointing to many of you, but my role is to plan what I feel is best for the future of Garsington Opera as a whole. I hope this letter at least offers an explanation. I also hope that by informing you at this stage, it gives you time to plan your summer schedules from 2020 onwards….

I would have preferred to have explained this to you in person rather than send a letter, but the practicality of getting everyone together outside of the season presents many difficulties. Nevertheless, we hope some of you are able to join us on 13 September as we would like to offer you the opportunity to talk this through with us.

The bulk of Garsington’s orchestra have played together, dined together, laughed together, lived together for 30 years, only to be chucked out like chaff. Garsington has been one of England’s greatest musical successes of the past generation. This is a bloodstain on its manicured lawns. A case for Hercule Poirot at the Arts Council, which funds the Philharmonia to take other musicians’ jobs.

« Death of a distinguished US composer, 96

Noam Sheriff had something the rest of us lack »