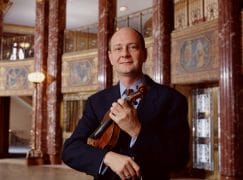 Just in from the Cleveland Orchestra:

We take the recent report of sexual misconduct allegations against concertmaster William Preucil very seriously. As previously indicated, we have suspended Mr. Preucil as of July 27, 2018.

The Board of Trustees has formed a special committee to conduct an independent investigation.  David J. Hooker (former Managing Partner of Thompson Hine LLP) is chair of the committee; Alexander Cutler (former Chair and CEO of Eaton Corporation), Stephen Hoffman (President of the Jewish Federation of Cleveland), Loretta J. Mester (President and CEO of the Federal Reserve Bank of Cleveland) and Beth E. Mooney (Chair and Chief Executive Officer KeyCorp) serve as members of the committee. They have selected Helen V. Cantwell and Arian M. June from the law firm of Debevoise & Plimpton LLP to investigate Mr. Preucil’s tenure at The Cleveland Orchestra and any other matters that are raised in the course of Debevoise’s work. Upon the conclusion of the review, we will share the key findings.