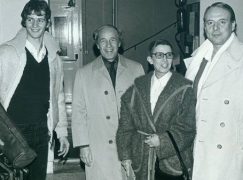 Jeanne Boulez-Chevalier, who has died on August 3 at the age of 96, was her brother’s closest confidante.

He would spend summers at her home in the Loire and it was there (I remember him telling me) that he received the call from President Pompidou, asking him what it would take for him to return permanently to France (Boulez’s answer, dreamed up on the spot, was the Paris institute, IRCAM).

Jeanne was responsible after her brother’s death in January 2016 for placing his manuscripts at the Sacher Foundation and the Bib Nat.

She is survived by her son Pierre Chevalier, a TV producer at Arte.

Boulez, Jeanne and the Stockhausens, father and son

What Furtwängler brought to the party »