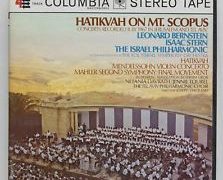 Everyone listened to this on the radio – there was no television in June 1967.

I was unaware until now that footage existed.

Domingo: ‘This has been the most extreme experience of my life’ »