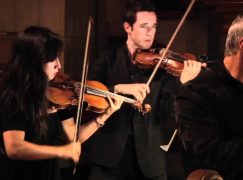 An ensemble crushed by bureaucrats finds new life in the north

We reported extensively on the demolition of Camerata Nordica, a high-quality international orchestra in Sweden.

The musicians, however, refused to accept its abolition.

Here’s the next chapter:

It’s been a rough couple of years for former musicians of the Camerata Nordica, but very slowly and with immense effort and support the orchestra is back where they belong – on stage.

In the last year their orchestra has been seen and heard across Sweden in Stockholm, Trollhättan, Vänersborg and Vara, piloting projects as the new in-house orchestra of the Aurora Music Festival, run and organised by Aurora Music, a Swedish non-profit with a 43-festival history and an immense international network. And now they’re headlining Aurora’s festival in Stockholm this month!

From August 24 to 26 you can experience the Aurora Chamber Orchestra live, led from the violin by Gordan Nikolic, twice in Stockholm’s beautiful Konserthuset and once in the main hall at the Royal College of Music, performing together with soloists Mischa Maisky and Isabelle van Keulen and working with the famous Swedish actor Stefan Sauk.

And this is just the start. We’re back;)