The US countertenor, accused of rape by a former protege, now faces the possibility of a police charge over attempted solicitation on the gay pickup site Grindr, it is reported. 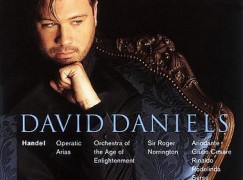