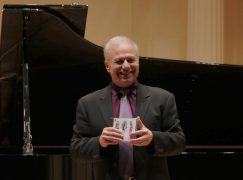 We are shocked to hear of the death of Glen Roven, an activist composer who was in regular touch with the Slippedisc community.

Glen died after 12 days in a coma and is grieved by his thousands of musicians whom he helped in varying capacities.

Among other things, he composed and produced records for Julie Andrews, Aretha Franklin, Leon Fleisher, Whitney Houston and Michael Jackson. He wrote film scores, concert works and musical satires such as this:

He had his own label, Roven Records, and was always available to musicians who needed a studio session.

For those who cannot attend, the details for a memorial tribute to the man and his music will follow this fall.