Salzburg’s overnight sensation is daughter of…

Asmik Grigorian, who took Salzburg by storm this weekend as the new Salome, is a Lithuanian soprano who has sung at the Theater an der Wien, the Berlin Komische Oper and Covent Garden. Last summer, she was a highly creditable Marie in Salzburg’s Wozzeck.

As of this morning, she’s a world star.

Asmik, 37, is the daughter of the late Armenian tenor Gegam Grigorjan, one of the earliest pillars of Gergiev’s Mariinsky ensemble, a performer who neither sought the limelight nor ever gave less than his all. Gegam died in 2016 and is sorely missed. 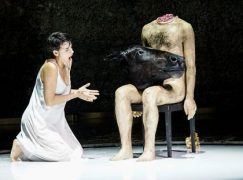