Where’s Macron when you need him?

One union is holding the whole house to ransom over a single pay grade. 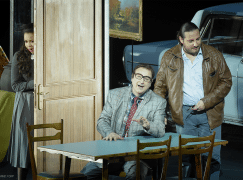 This is a picture from Don Pasquale, which ought to be playing on July 12.

UPDATE: Apparently it will. Don Pasquale is at the Théatre Garnier, which is not hit by the strike. Yet.