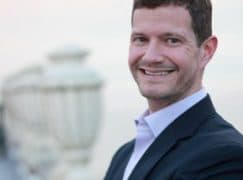 You might call it a tale of two operas in Texas. Ian Derrer, one-time artistic administrator at the Dallas Opera, returning now to run the whole show, and his partner, Daniel James, presiding over production media plus the chorus and orchestra at the Houston Grand Opera.

They have a lot in common: Both grew up in small cities shadowed by larger neighbors. Both trained to be performers. Both chose instead to make it happen, off-stage instead of on.

For Derrer, life began in Monroe, N.C., near Charlotte. A scout from Southern Methodist University discovered him at a state-sponsored summer program for high school musicians and lured him to the Meadows School of the Arts. There he plunged into the world of the baritone, or rather “bari-tenor,” as he puts it. But interning at the Dallas Opera, helping visiting British director John Copley mount Elektra, the maddeningly demanding classical music drama …

Daniel James is artistic media manager and music administrator at HGO. he is responsible for the management of the chorus, children’s chorus, corps dancers, and orchestra; for all recording activities; and for supertitles.

« Just in: A major violin competition bans teachers from jury