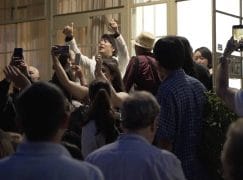 On July 6, Lang Lang performed Mozart’s Piano Concerto No. 24 at Tanglewood in the manner most natural to him. (This was after a year’s absence due to an injury to his left arm that caused him to change his program from the first Tchaikovsky piano concerto to the Mozart Concerto No. 24, which involves less of the pounding typical of Romantic era concertos.) He lifted his left arm high above his head whenever he felt like it, mugged for the audience a few times, tilted his head back at irregular intervals, played every note in the piece as though it were his last day on earth, and generally failed to conceal his immoderate enjoyment of making music in that exact spot at that exact time. Everyone knew he was having the time of his life. But it wasn’t vulgar. It was Mozart….

I had a wonderful time at Tanglewood Music Festival. Thank you Boston Symphony Orchestra and Andris Nelsons 🎻🎹🎼 for an unforgettable concert! Another thank you to all of my fans for your continued support