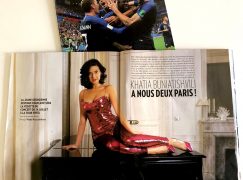 Message from the LA Phil:

Khatia Buniatishvili has withdrawn from the previously announced Dudamel Conducts Rachmaninoff at the Hollywood Bowl on Thursday, July 12, at 8pm due to illness. Pianist Behzod Abduraimov will perform in her place.

On July 14, France will mark its independence with what it hopes will be a World Cup win. Where would any pianist rather be?

« From the Top will now talk down to us

So what if Poppea’s pregnant? »