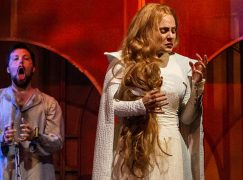 In the verismo vs critics war, verismo just won

The combative Michael Volpe (also known as @NoisyMV), head of Holland Park Opera, has a weakness for neglected works by neo-realists of the late 19th century, especially Pietro Mascagni whose operas he has been bringing back, one by one.

Not all of them have gripped. In 2016 I wasn’t sure I’d survive Iris, a seedy summer tale of rape, brothels and suicide. My companion took flight in the interval. Last ears was Zaza.

This summer, most London critics lost patience with Isabeau, the tale of a princess whose father makes her ride naked through the town. ‘An embarrassing and misshapen dud,’ was the verdict of my Spectator colleague, Richard Bratby. ‘Clichés, codswallop and passionate music,’ was the FT’s headline.

Since the conductor is a pal, and the production is coming next year to New York City Opera, I decided to catch one of the later shows, no easy feat since the entire run was sold out, despite bad reviews. I went on the hottest night London had sweated for 32 years.

Is Isabeau a masterpiece? By no means. There are too many holes in the flimsy plot and too much patchwork in the music, with pages of orchestration sounding like they had been lifted from Strauss, Elgar and, in one intermezzo, Sibelius. These deficiencies aside, the show is redeemed by an ingenious set and pinpoint direction by Martin-Lloyd-Evans. My heart was melted by Anne Sophie Duprels in the title role and by David Butt Philip her heroic lover, Folco. Francesco Ciluffo conducted with an imposing intensity.

The two hours passed very fast. Mascagni, no genius, knew how to sing on a summer’s night. I’m still whistling the intermezzo.

The final score was verismo 1, critics 0.