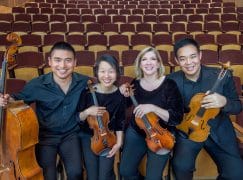 Our string quartet diarist Anthea Kreston has been investigating both sides of the year’s ugliest chamber music incident. Here’s her report:
String quartets are complicated structures. Each has a unique DNA as well as a specific and well-tended collection of interconnected things which sustain it financially, musically, and emotionally. Last week, the much-beloved Cavani Quartet suffered a devastating blow – the Cleveland Institute of Music, which had employed them for 30 years, terminated their contract, severing a relationship that had grown and flourished for these long years, and which had provided the solid foundation on which the Cavani could build their lives, providing a home where they could flourish and become integral parts of their communities.

The Cleveland Institute of Music is a leading music school in America, with a prestigious faculty and state-of-the-art facilities. It also had something which no other school in the States had – the legacy of chamber music teaching which reached beyond the nuts-and-bolts. A philosophy which teaches music as a path to becoming a better person – more empathetic, more honest, and with an understanding that each of us can find a path in the musical world – every person has a voice which is needed and special. The Cavani Quartet perfectly embodies these principles, and judging by the outpouring of support by colleagues and former students, their outrage and disbelief – their anger and mobilisation – these words speak to the deep impact that this extraordinary Quartet has has on the musical world. Furthermore, their current and former students have garnered a multitude of successes – from the international competition circuit to educators and music advocates.

And yet, the nobility of the response of the Quartet itself speaks volumes. You hear the pain in their voices, how this has affected their families and threatened their existence, but they remain strong, loving, and kind.

The Cavani sent me this statement: ‘The love we share with the students, and faculty whose lives have been intertwined with ours through the power of music for the past thirty years is a treasure and has been a life preserver in this really tough time. We were stunned by this – we had called the meeting last Monday to let President Hogle and Dean Bundra know that we had accepted the resignation of our cellist from the quartet and immediately after hearing this news from us, we were informed of the plan to sever our affiliation with CIM, including Preparatory, Young Artists Program and Case West en Reserve University students. As you can imagine we were in complete shock. The official CIM email came out immediately  thereafter.’

A Cleveland colleague, violinist Gabe Kitayama-Bolkosky, adds: ‘The problem is symptomatic. Somehow, universities and conservatories have decided that rather than being temples of learning, where they develop young people into deep artists who have an understanding of the human condition, they need to create commodities that “win” competitions. The problem is that winning is not what music education is about. It’s about depth of character and using long practiced skills to move people.

‘This is what the Cavani quartet stood for to all of us. Creating music could be a process that lasts a lifetime and if all of us stayed with it, we could become a true artist, a Donald Weilerstein, a Peter Salaff, a Martha Katz, a Paul Katz. Most of us did not get into this business to hobnob with the “best.” We wanted to learn to contribute in meaningful ways to our fellow musicians and audiences because Music served us that way. It soothed our hearts and healed our souls. CIM has now joined the fold and is looking for teachers who teach to external results rather than the long search that an artist’s life is about. Its the dark side. It leads to suffering for many musicians, no matter how talented or successful. It sends a message to thousands of young people that there is likely not enough room in the field for them. This is most tragic and will have sad repercussions for the school and our community.’

Reaching CIM for clarification was not easy, but they provided me with this: ‘As I’m sure you can imagine, this is a complex situation with a lot of nuance. It’s also a personnel matter, which means there is very little we can say publicly by way of explanation. I can only provide the following statement from President & CEO Paul W. Hogle and Dean & Chief Academic Officer Judy Bundra, PhD:

“Last week, we learned that the Cavani Quartet had released their cellist; he joined the Quartet last summer from the University of Central Florida preceded by Indiana University. With the Quartet now at another personnel transition point (after two members left in 2016), CIM decided it was now time for a different direction. After much discussion and deliberation, and with the full support of Trustee leadership, CIM decided to end its relationship with the Cavani Quartet.

“The chamber music program at CIM remains under the leadership of the esteemed Peter Salaff, a founding member of the Cleveland Quartet and a fixture in our community. Members of our incredibly talented string faculty — many of whom have deep chamber music experience and are eager to work with students in that setting — will be coaching ensembles. We are also exploring multi-year partnerships with other professional string chamber music groups to provide a contemporary performance perspective. Words alone cannot fully describe the impact the Cavani Quartet has had on CIM over the past 30 years. While there will be time to celebrate, thank, and congratulate them, we want to add our admiration for three decades of imprint on a generation of CIM alumni.”‘

Please note the difference in time-lines presented by the Cavani and CIM. The discrepancy is a cause for concern.

I have been inundated with messages this week as I began to investigate this story. My inboxes are overflowing with testaments. Social media is exploding with anger over this CIM decision – letters are being written, plans being made. Who is to say if there is a path back for this unique and passionate Quartet – but there is no doubt that there is an ever-growing and strengthening “circling of the wagons” around these amazing souls.

Much in this story remains to be told: why the cellist quit, why CIM reacted in such peremptory fashion, whether Hogle – who has a history of confrontation with musicians – was the driving force. We expect these details to emerge in the coming days. This is a first attempt to lay out the two sides of the story.

« Cleveland Orchestra cellist: We all play with pain

Piotr Beczala: How Bayreuth messed up my casting »