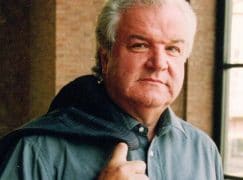 A tribute to the late baritone by Christian Thompson:

Claudio Desderi had a long and illustrious career on the international opera stage and there are many others more qualified to talk about him as an opera singer than than I.

But I knew him very well in masterclass, and what a fantastic teacher he was. He came to the Verbier Festival Academy and worked with our singers (at least) on Barber of Seville, Bohème, Cosi fan Tutte, Don Giovanni and the Marriage of Figaro.

He had spent his whole career immersing himself in text and truth. For him there was no other way to prepare, so understanding of every single role in “his” operas was second to none.  Sometimes it was as though Da Ponte himself was present in the room. He knew how each character should play (he himself was a beautiful actor) and their importance in the story. Young singers had absolutely nowhere to hide. (Once he even stepped in for an ailing Fiordiligi in rehearsal, of course singing word perfect, although coloratura needing some work).

In 2016, his last visit to Verbier, he led masterclasses of Don Giovanni and directed an unforgettable Falstaff with Bryn Terfel in the title role; Bryn had made his Covent Garden debut as Masetto with Claudio as Leporello (Thomas Allen as the Don) and it was a wonderful reunion.

Claudio had a big heart, he was kind and respectful. He took great pride in passing on his wisdom to others, and in doing things right. He was rigorous and always demanded more, but with love and a twinkle in his eye. For me, there was no better role model for young singers.

« Death of a dominant baritone, 75