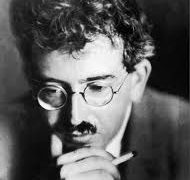 Why is Walter Benjamin starring in another opera?

The German-Jewish philologist and philosopher who committed suicide at Port-Bou on the Franco-Spanish border in September 1940 is the hero of a new opera, Benjamin, which has just opened at Hamburg.

Peter Ruzicka’s work is by no means the first on the subject.

The British composer Brian Ferneyhough created Shadowtime in 2005 on the same theme, and the same outcome.

And Elliott Sharp put on a Benjamin opera in 2014 in Brooklyn. It stayed in Brooklyn, apparently.

It’s hard to fathom the connection between Benjamin’s lexical precision and the excesses of opera, let alone the contrast between his essentially dull life and the requirements of drama.

Has anyone seen the new Ruzicka yet?

On a gay couple’s wedding cake and Bach’s antisemitism »