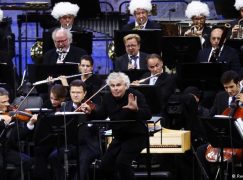 From a Reuters report of Rattle’s long farewell to the Berlin Philharmonic:

On Saturday, thousands of people had braved driving rain to attend a full dress rehearsal, instead of watching the German team play in the World Cup.

Many musicians wore wigs in tribute to the conductor’s trademark curly white hair.

“See you very soon,” the conductor promised, as “Sir Simon” will not disappear completely from Berlin. Rattle plans to remain a resident of the German capital and to lead orchestral and opera performances there.

« Barenboim calls for compassion in the Middle East

Did Mahler get his klezmer idea from Mendelssohn? »