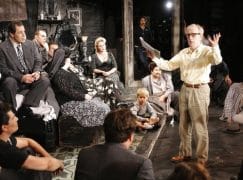 So does Woody Allen’s opera work?

The veteran director is bringing his LA production of Puccini’s Gianni Schicchi to La Scala next season. Here’s how it went down first time round in 2008.

This initial lapse of taste can be forgiven, however, because once the curtain rises, what follows is pure delight.

One might have guessed that Allen would have plumped to set this tale of a noisy, scheming family in the Jewish Brooklyn he paints in many of his films, but wisely he keeps it Italian – though Santo Loquasto’s breathtaking designs, entirely black and white in homage to the neo-realism of Vittorio de Sica, evoke the backstreets of post-war Naples more than the medieval Florence of the libretto.

I’m not taken by the idea of an enraged relative returning to murder Schicchi at the climax, but Allen otherwise lets the comedy flow without inserting extraneous gags or concepts…

Anthony Tommasini, New York Times: Far from being incompetent, his “Gianni Schicchi” is a cleverly updated and inventive staging of the popular comedy, marred only by a regrettable directorial liberty at the end. In another recent comment to the press, he described “Gianni Schicchi” as “funny compared to ‘Tosca,’ not funny compared to ‘Duck Soup.’ ” True enough, though as the performance began I was briefly worried that Mr. Allen was determined to turn Puccini into the Marx Brothers….

But the only real miscue comes with Mr. Allen’s altered ending. After bamboozling the family of Donati, Puccini’s Schicchi points to the happy Lauretta and Rinuccio, who now have the money to marry, and asks the audience’s indulgence, since his scam has fostered young love. But Mr. Allen has the indomitable Zita (Jill Grove), Donati’s avenging cousin, burst in and stab Schicchi, who poses his question to the audience and then drops dead.

You can understand why Mr. Allen could not resist giving an Italian vendetta twist to Puccini’s happy ending. But isn’t it more comically, cynically, triumphantly right for Schicchi to get away with everything?