Message from the LA Phil: 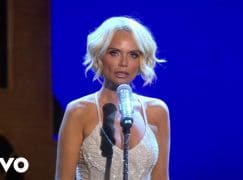 Kristin Chenoweth (pic) has withdrawn from the previously announced Bernstein 100 Celebration with Dudamel at the Hollywood Bowl on Tuesday, July 10, at 8pm. Due to ongoing complications from a past neck injury, Kristin Chenoweth is taking some time off from performing so that she can properly heal.We are delighted to announce that American actress, singer, and dancer Sutton Foster will make her Hollywood Bowl debut on this program.

Not quite the same league.