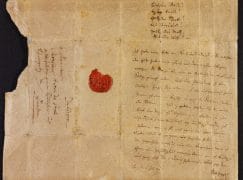 Salzburg gets a letter from Mozart’s ‘shithouse’ 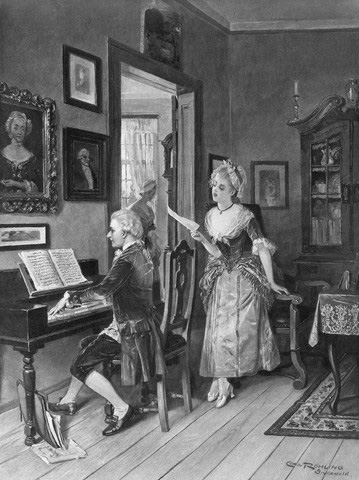 The Salzburg Mozarteum Foundation is delighted to be able to report on one of its most valuable acquisitions in the last ten years. Thanks to the generosity of Maria-Elisabeth Schaeffler-Thumann, a letter that Wolfgang Amadé Mozart wrote to his friend Anton Stoll in 1791 is now a part of the Mozarteum Foundation’s Biblioteca Mozartiana, a library that houses its collection of original Mozart autographs. The last time the Foundation was able to acquire one of Mozart’s original letters was in 2001. As the Foundation’s president, Johannes Honsig-Erlenburg, explains, “This is a very special moment for the Foundation and a stroke of the greatest good fortune that the family that owns this particular Mozart letter approached the Mozarteum Foundation directly. We are grateful to the family for saving us from having to compete in the sort of bidding war that a charitable institution like the Mozarteum Foundation
has long been unable to afford. And what a gift Maria-Elisabeth Schaeffler-Thumann has made us by financing the acquisition of this letter! As a result we are able to make Mozart’s frivolous joke accessible to a worldwide audience.”

Rolando Villazón, who is the Mozarteum Foundation’s official ambassador and the intendant of the Mozart Week Festival, has the following to say about the significance of this priceless acquisition: “Every letter that Mozart wrote opens up a new door that grants us access to the soul of the greatest musical genius of all time. To discover a new letter from Mozart is like finding a new flower in a wonderfully beautiful garden.” …

Mozart wrote to his colleague and good friend Anton Stoll (1747–1805) on 12 July 1791, less than six months before his death. Stoll was then based in Baden near Vienna. Mozart often sent his wife Constanze to take the waters at Baden, and Stoll helped him to find suitable lodgings for her. In June and July Constanze again took the waters at the Antonienbad in Baden. These baths were particularly expensive and as a result they were “visited only by sick people from the upper classes”, to quote a contemporary account.
Mozart visited his wife on several occasions during this time and used the opportunity to perform several of his works in the town’s parish church, where Stoll was choirmaster and, as such, responsible for performances of sacred music. It was for Stoll that Mozart wrote one of his best-known sacred works, the Ave verum K 618. Composed on 17/18 June 1791, it was performed on the Feast of  Corpus Christi (23 June) that same year in the Baden parish church.

The contents of Mozart’s letter are briefly and easily summarized. In it he asks his friend, the choirmaster Anton Stoll, to send him the scores of two works that they had previously performed together in the church in Baden. But Mozart went to great lengths to embed this simple request in a typical web of jokes. Mozart had performed one of his Masses – probably K 275 – with Stoll in Baden on 10 July 1791. The composer had left his autograph score with Stoll but asked him in his letter to send him the parts that had been prepared for the performance so that he could also perform the work in Vienna. The fact that Mozart also performed a Mass by Michael Haydn (1737–1806) in the final year of his life attests to the high regard in which he continued to hold his former colleague from Salzburg.

Mozart introduces his letter with a brief “poem”, apostrophizing his friend as “liebster Stoll! / bester knoll! / grösster Schroll!” At first sight these appear to be merely random rhymes, but Mozart is in fact using terms that were current in his own day to describe fat and extremely coarse individuals. This was not meant to be taken seriously, of course. Indeed, all of Mozart’s friends had to be able to deal with jokes of this kind.

The second page contains a letter written by Mozart’s pupil and assistant Franz Xaver Süßmayr (1766–1803). He to o asks for the return of the aforementioned scores. But this letter is in fact a kind of forgery, for this page, too, was written by Mozart attempting to mimic Süßmayr’s handwriting. “Süßmayr” repeats Mozart’s request and at the same time threatens Stoll by saying that he will learn no more about the“opera” on which he, Mozart, is currently working. He is referring here to Die Zauberflöte, which received its first performance in Vienna two and a half months later, on 30 September 1791. We may assume that Stoll did all he could to satisfy Mozart’s demands because the composer later invited him to Vienna for a performance of Die Zauberflöte. This small example of Mozart’s inimitable way with words culminates in the letter’s date: “In the little shit-house on 12 July.”

Only two of Mozart’s letters to Stoll have survived. Both of them attest to a close relationship between two friends. Until now both letters have been in private ownership. Thanks to a generous donation from Maria-Elisabeth Schaeffler-Thumann, the Mozarteum Foundation has now been able to acquire this second letter for its Biblioteca Mozartiana. The Foundation’s library houses most of the Mozart family’s correspondence, notably almost two hundred autograph letters in the hand of Wolfgang Amadé Mozart. The collection also includes numerous music manuscripts and derives in essence from gifts and legacies on the part of Mozart’s widow Constanze and their two sons Carl Thomas and, above all, Franz Xaver Wolfgang Mozart.

« Who’s paying top $ for a concertmaster?

Opera event: ‘People of color are encouraged to attend’ »