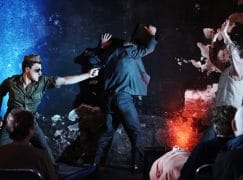 Pop-Up Opera has suffered the loss of its technical equipment, as well as most of its props, when its van was burgled in Peckham, south London.

Pop-Up Opera, a non-funded company, is the third London company this year to be attacked.

Central School of Ballet had a similar incident in Farringdon and the Lord Chamberlain’s Men touring van in Lewisham.

Pop-up has raised a fundme page and is making sure the show goes on.