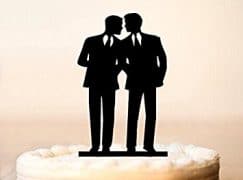 On a gay couple’s wedding cake and Bach’s antisemitism

As my Twitter feed erupts into a chorus of groans and moans about a newly handed-down Supreme Court decision, I find myself thinking distinctly minority, and surely unpopular thoughts, at least as regards those tweets coming from the left, which I consider my
political/ideological home. (My musical home is with Mozart, and Billie Holiday, just in case you are curious).

Putting Mozart and Billie aside, this was, as we most all know by now, the case of the Colorado artisan-baker who refused, on religious grounds, to custom-design and bake a wedding cake for a gay couple. As I understand the story, he offered to sell them a ready-made cake; it was the idea of creating a special one that provoked his demurral.

Most of the comments I read online this afternoon considers the ruling, though on narrow grounds, as a sort of victory for the right, and for the religiously bigoted, and as a gay-rights issue, incorrectly decided. So why do I think that such a view is wrong? Why do I think that the baker, narrow minded as he may be, needed to be protected in his refusal to act?

It has to do with my profound belief, not, as it would appear, so widely shared on the left side of the Twittersphere, that

a. custom designing a cake is an act of artistic creation/expression, and that
b. artistic expression is a form of speech, and that freedom of speech is constitutionally protected under
our system, and that nothing in the American system means anything without that bedrock protection.

In support of my view, I would like to tell a parable, lightly fictionalized, loosely based on an actual event that took place some years back in a community not unlike our own. Once upon a time, in the city of Fèveville, the Beantown Baroque, a correctly-pitched-at-415 chamber orchestra, decided to give a performance of Bach’s St. John Passion, transcendental choruses, antisemitic bits, and all. It was a big deal. Primo Posner, the gifted concertmaster, and a most scrupulous scholar/performer, read the entire Gospel narration just before rehearsals began, and discovered that his idol, J.S. Bach, had willingly set some passages that cast the Jewish people, his people, in a most unfriendly light, imputing to them a collective guilt for the death of mankind’s Savior. Primo was shocked, upset and conflicted. He passed a nearly-sleepless night, trying to decide what to do.

Did Primo then resign from the first chair, refusing to perform such a flawed masterpiece? It would have been easier for my parable had he done so, but instead (and how wonderfully Jewish) he wrote an anguished essay about the issue, seeing to it that the Beantown concertgoers had a chance to receive an offprint of his thoughts prior to entering the hall and attending the concert. They could then read the essay, and get all conflicted themselves about the pleasure they were deriving from the sublime music.

I compare Primo Posner, nonetheless, to the no-can-do baker in Colorado. Both are artisans in the world of the arts, and both are conscious, as we all should be, of a moral/spiritual underpinning to the work they do. Maybe, like Primo, the baker should have accepted the commission, and then written a dissenting essay.

But in any case one cannot, in my view, coerce artistic expression from someone who believes that his or her moral or ethical principles are being violated. Defending the integrity of the arts and of artists is not, seemingly, at the top of most peoples’ priority list these days. But it should be, along with many other grave issues that are more clearly played out in the news of the day.

« Why is Walter Benjamin starring in another opera?

BBC sells off Maida Vale at the worst possible time »