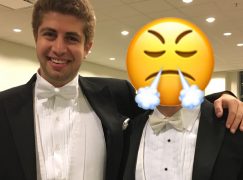 ‘My girlfriend cost me a place at music college’

First swallow of the silly season:

A clarinetist has won $350,000 from his former girlfriend for stopping him from going to study in LA.