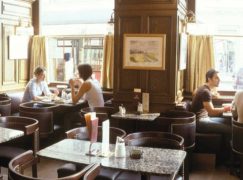 Meeting an orchestra too early in the morning

From a review I have just written in the Wall Street Journal:

As a young radio journalist in Jerusalem in 1972, I would come off the night shift at 8 a.m. and go to breakfast at Café Alaska, where orchestral players were kvetching away the half-hour before rehearsal. As the musicians ­filtered out, the place filled up with black-gowned lawyers reading their briefs before court opened. Their seats, in turn, were taken by actors dropping in to read reviews and by frazzled mothers in need of a shot after leaving the kids at school. Café Alaska was not so much a place of refreshment as a carousel of human comedies spun around the noisy grinding of coffee beans and furnished with a rack of ­polyglot newspapers on the far wall.

The best cafes, I learned there, were the ones that the old-timers sighed over, the Herrenhof in Vienna, the ­Romanisches in Berlin and the Garden Cafeteria at 165 East Broadway, on New York’s Lower East Side, where Isaac ­Bashevis Singer weaved his tales. The best cafes, in other words, exist in a mist of ­aromatic memory to sustain our weakened civilization through cardboard slurps at Starbucks….