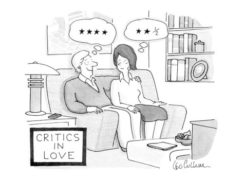 The excellent Canadian writer Colin Eatock explains why he is giving up his career as a reviewer of concerts and opera.

I believe that our culture (and by “our culture” I’m talking about North America, and perhaps also Europe, to some extent) has undergone a fundamental shift. Expertise is no longer much valued in the cultural sphere; rather, it seems that the currently prevailing belief is that any one person’s opinion is as good as any other’s. Furthermore, if critical judgements are acknowledged at all, they are the judgements of the masses, expressed in economic terms: what is best is what sells the most.

There are some determined “elitists” who steadfastly oppose this trend. I wish them well, but I’ve come to the conclusion that to stand against this sea-change is to defy the incoming tide, as King Canute once tried to do. And even Canute knew when his feet were wet.

As a profession, classical music criticism emerged in the early 19th century and remained an esteemed aspect of musical culture to the end of the 20th century.  It had a good run. But to cling to the idea, in the year 2018, that music criticism remains somehow relevant, and to soldier on with it, is to behave like a child clinging to a much-loved but hopelessly broken toy who refuses to throw it away….

« Trifonov is injured in a bike accident