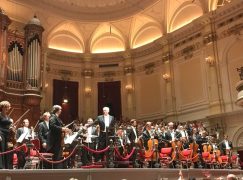 We hear that Bernard Haitink suffered a very heavy fall at last night’s concert in Amsterdam with the Concertgebouw Orchestra. He’d just conducted a miving performance of Mahler 9.

Whilst taking his second ovation Haitink, 89, tripped and fell face down. He took a few minutes to get up (with help) and looked stunned but aware of what was going on.

This was the second of three concerts.

Haitink before the concert.

UPDATE: The Concertgebouw has issued this statement:

The Royal Concertgebouw Orchestra is relieved to inform everyone that our honorary conductor Bernard Haitink is doing well under the circumstances. After tonight’s concert in the Concertgebouw, during applause, he fell while on stage. He is now recovering in his hotel. This of course gave us all quite a scare. We thank you all for your concern!

« Master and commissioner: How a cellist got his dream concerto